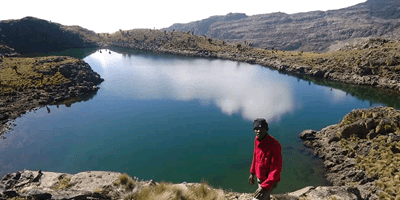 Sirimon coming off the west passes through the dry side of the mountain with its giant trees and rocky terrain, and the descent onto the Chogoria path is exactly different with its lush bamboo and highland forests.

Ascent is on the dry side of mountain which offers some of the finest walking. Climb up through forest into a wide ridge approach to the summit area. The route starts on the northwest side of the mountain near Nanyuki.

Mount Kenya climbing In Sirimon Route and Out Chogoria is ideal during the following seasons : Jan to March and July to October.

Access is adequate and the bunk house facilities are the best on this side of the mountain.

Mount Kenya is located in central Kenya, about 16.5 kilometres (10.3 mi) south of the equator, around 150 kilometres (93 mi) north-northeast of the capital Nairobi Mount Kenya is the source of the name of the Republic of Kenya.

Mount Kenya is a stratovolcano created approximately 3 million years after the opening of the East African rift. Before glaciations, it was 7,000 m (23,000 ft) high. It was covered by an ice cap for thousands of years. This has resulted in very eroded slopes and numerous valleys radiating from the centre. There are currently 11 small glaciers. The forested slopes are an important source of water for much of Kenya. Mount Kenya climb Sirimon Route – Sirimon route

There are several vegetation bands from the base to the summit. The lower slopes are covered by different types of forest. Many alpine species are endemic to Mount Kenya, such as the giant lobelias and senecios and a local subspecies of rock hyrax. An area of 715 km2 (276 sq mi) around the centre of the mountain was designated a National Park and listed as a UNESCO World Heritage Site in 1997. The park receives over 16,000 visitors per year.

Drive from Nairobi to Nanyuki through the central highlands and arrive at Nanyuki in the early afternoon for an acclimatization walk to the Equator line. Dinner and overnight at Simbas Lodge (budget hotel).

After a late breakfast, drive to the Sirimon park gate (45 minutes) where the trekking starts. Walk for 9 kms to the OLD MOSES HUT (3300 m). Dinner and overnight at the huts.

Start for day at 7.00 am and walk through the Ontulili valley ,Liki Valley and the Mackinders valley to Shipton’s Huts (4200 m) arriving in the late after noon. Dinner and overnight at the huts.

Wake at 2.30 am, and after a cup of tea, start the summit ascend arriving on top of point Lenana(4985 m)at around 6.15 for the sunrise. On a very clear day, one is able to see Mt. Kilimanjaro. After the photos, descend to Mintos for breakfast and then further down to Meru Mt.Kenya lodge bandas for dinner and overnight.

After breakfast, descend for 15 kms through the bamboo forest to where you get the 4WD vehicles waiting for you and then drive down to Chogoria town. From Chogoria town you board transport back to Nairobi where you arrive in the late afternoon.